Do not ask me how, but somehow Octopus Paul of the Sea Life aqarium in Oberhausen, Germany, has an uncanny talent for predicting World Cup Winners. Paul predicts by placing shells in designated boxes. 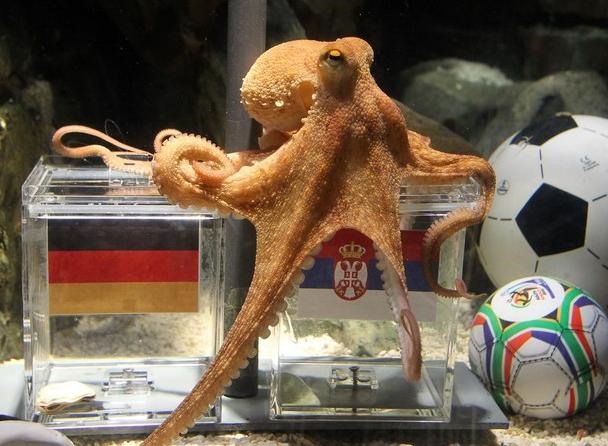 "So far, many of the Group round's matches have seemed surprising and unpredictable. Who would have predicted Serbia would have upset Germany!?!?!

Paul, the octopus did.

If you thought Groundhog's Day was a hoot, Puxatany Phil's got nothing on Paul. The Oberhausen Sea Life Centre in Germany reports Paul has predicted World Cup winners with 100% accuracy so far."

Want to master Microsoft Excel and take your work-from-home job prospects to the next level? Jump-start your career with our Premium A-to-Z Microsoft Excel Training Bundle from the new Gadget Hacks Shop and get lifetime access to more than 40 hours of Basic to Advanced instruction on functions, formula, tools, and more.

Damn yoo animal, germany lost because of you

my octopus theory: how is he pridicting?
ans: i have analysed all his prediction and I have done analysis on assumption that he chooses flags on the basis of colour. i dont know whether the flag is shown to him or not at the time of prediction.
my analysis is as follows:
1) he chooses black colour as most of his sea food might be black, only once he has not done this in case of SERBIA vs GERMANY may be he was in mood of trying some different non-black food.
?2) he doesnt like red and white combination may be it is colour of some poisnous sea animal which he must not eat.
and for coming final also he has not choosen HOLAND as it contains red and white combination.

and guys dont blame me if my theory go wrong as this analysis is done in 2 minutes.... ha ha ha